Brigantia , goddess of the Brigantes 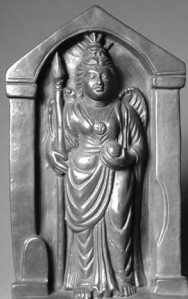 Brigantia or Briganti was a tutelary Romano-Celtic, Gallo-Roman or Romano-British goddess of the Brigantes in northern Britain. She was therefore the eponymous and protective goddess of the Brigantes who were the largest British tribe in Yorkshire and northern Britain in late antiquity. Brigantia is cognate with burgundi of Proto-Germanic origin meaning ‘high’, thus the ethonym Brigantes may translate as ‘the high, noble ones’ or ‘highlanders’. A British goddess at the time of the Roman invasion and occupation she became identified with Caelestis. Known as the ‘high one’. She personified the hegemony of the Brigantes, was a goddess of springs, streams, river and water cults, and corresponds to the Irish goddess Brigit in Ireland.

Probably identical with the Gaulish goddess Briginda known only from inscriptions. She was equated with Minerva by the Romans. In the interpretatio Romana she was also equated with Victoria. Two inscriptions from Castleford and Greetland (near Halifax) refer to Victoria around 208 AD. The River Brent, a tributary of the Thames at Brentford is named after Brigantia. At Corbridge on Hadrian’s Wall where she is termed celestial, there is an altar which also mentions Caelestis Brigantia. At Birrens a stone relief on the Antonine Wall in Scotland she is shown with attributes of Minerva. Seven inscriptions to Brigantia include those from Birrens, Dumfries and Galloway. At Irthington in Yorkshire she is referred to as ‘divine nymph Brigantia’.

The bas-relief of the Roman era at Birrens she is crowned as a tutelary goddess with the head of a gorgon on her breast, holding a spear and globe of victory. The Welsh personal and place name Braint seems to originate with Brigantia. The name Brigantia is from the root meaning ‘high’, ‘lofty’ or ‘elevated’. An epithet meaning simply ‘the high goddess’.

4 responses to “Brigantia , goddess of the Brigantes”