Badb, the Irish goddess of war.

Badb was a Celtic and Irish war and crow goddess who was also seen as a supernatural woman and demon. Also known as Bibe, Bellona and Cautth Bodva, she was also the goddess of enlightenment, inspiration, life and wisdom. In the  mythology of Ireland her name means ‘crow’ in Old Irish and in Modern Irish she is called Badhbh which means ‘vulture’. The name means literally, in later Irish, ‘scolding old hag’ or witch, as well as ‘scold crow’ who appears on the battlefield. The implication of the crow or raven form is one being perceived as dangerous.

In Old Irish mythology she is believed to be an evil spirit that delights in carnage, in inciting armies against each other, as well as filling warriors with fury. Irish variants refer to her as badhbh or ‘hoodie crow’, a fairy, and scold. In early Irish she is called badb and the ‘crow demon’ is Badba. In Ghaulish she is Bodv as in Bodvo-guatus. For the Welsh she was bod (or kite) thus Bodnod. 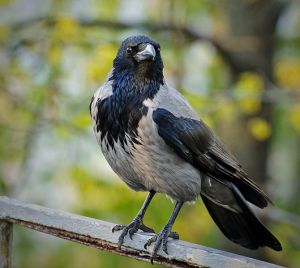 The hooded or ‘hoodie’ crow.

Badb was the daughter of either Cailitin or Ernmas who was one of the Tuatha de Danaan. Wife of Net or Niet or his granddaughter. One of a trinity of names including Ana, or Anu, and Macha who were known as the Fate Trinity, and regarded as the three Valkyrie aspects of the triple deity Morrigan. The Morrigna were the triple goddess Morrigan, Macha, and Nemain. The sisters of Badb were thus Macha and Morrigan all of whom were war goddesses. Badb was possibly related to the Ghaulish deity called Catubodna or Bodva. Badb, as a form of Morrigan, was capable of changing shape at will. As a ‘shapeshifter’ she took the form of a hooded crwo, a wolf, a heifer of bear, or a female giantess who straddled a river.

In the ancient Irish mythological account of the second battle of Mag Tuired, a crucial battle against the Fomorians, Badb and the Morrigu drove them out of Ireland. Therefore Badb, with the Tuatha de Danaan defeated the Fomorians. Before a battle Badb also confronted and frightened the Irish hero Cuchulain. This she achieved by turning into Badb Catha, the crow or raven of battle, the ‘battle crow’ and harbinger of death. 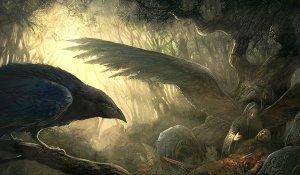 Badb, as an evil personality, frequented battle fields before and after the slaughter. In this role Badb was known as badhbh chaointe  who presaged death as a ‘weeping’ or keening’ crow. Badb was identified with the bean-sidhe or banshee, in her function of pre-empting death to certain families. The bean-sidhe was a phantom, a spectre, or female fairy, who is also commemorated in County Kerry at Lisabe or Badb’s fort.

The term bodh or badh meant originally rage, fury, or violence, which eventually came to signify a fairy, witch or goddess. The English Royston Crow is the squall-crow or Fionog. In this aspect Banba was analogous to the Gaulish figure called Bodua.

5 responses to “Badb, the Irish goddess of war.”