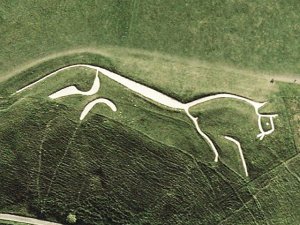 The horse, which is regarded as magical and widespread in myth, has been closely associated with humans for millennia having been used domestically and in warfare for cavalry and chariots. Ownership of a horse was a sign of wealth and prestige, and was the mount of kings, nobles and heroes, having been domesticated after 1750 BC with little evidence prior to 2000 BC (Cooper, 1992). Extensive proof of the importance of the horse is evidenced by its continuing “…to be a symbol of great religious significance throughout the pagan period.” (Gelling, 1969). Other interpretations consider the so-called English “…aversion to eating horse-flesh may be one indication of a long-forgotten horse-totem.” (Brown, 1950). Moreover it is believed that the horse “…played a pivotal role as a sacrificial, totemic and symbolic animal in an array of prehistoric and historic contexts.” (Moore-Colyer, 1994).

In symbolic terms the horse represents power and dynamism, wisdom and fleetness of foot and, as such has a duality in solar and lunar terms (Cooper, 1992). The white horse is a solar symbol and, as an attribute of the god Poseidon, is represented by the white horses of the sea. The white horse is not only regarded as sacred from Scandinavia (where Cloud Horses carry abroad the Valkyries), through Italy, Greece and Asia Minor, but in mythology drew the chariots of both Mithras and Apollo. Many solar deities of the Celts are depicted as horses and the may well be an association between the Uffington horse and Celtic horse-gods. Folklore contains horse symbolisms that retained a potency long after pagan practices had declined with one disputed view being that “…at least two of the famous hill figures surviving in England up to recent times were associated with the pagan gods of the Anglo-Saxons.” (Gelling, 1969).

In Scandinavian and Teutonic myth horses are sacred to Odin and Woden. For the Celtic peoples a popular theme in folklore is of horses as water-sprites which includes the Water Horse and the Kelpie. Etymologically  Epomeduos was a Gaulish personal name derived from horse and mead, and similarly aisuamedha  meant horse-strength or home-drunk. In other words the coupling of a king with the divine mare is the reconstruction of the myth or totemic identity. Horse cults have complex links between the European Celts and the peoples of south-eastern Europe and the Eurasian steppe.

The seafaring Semitic Phoenicians practised a horse-cult (Brown, 1950), and their trade routes and sea-voyages reached as far as Britain. Ancient Egypt possessed little horse symbolism even though “…the horse-cult in Britain is to be traced back to Crete or Egypt, then we should be able to trace a horse-ceremony in folklore.” (Corkhill, 1950). Thee Rig Vedas claim Seven Mares pull the chariot of Surya their god of the sun, or ‘Shining Sun Horse’. For the Hindu Varuna, was the ‘God of the Cosmic Waters’ or ‘Cosmic Horse Born of the Waters’. For the Hindu Kallku , as a white horse, was the incarnation of Vishnu. In the mythology of China there is the ‘Cosmic Cloud Horse’.

Lord Surya with his chariot of seven horses.

For the Greeks the ancient Orphics celebrated the goddess Hippa as the ‘Soul of the World’ (Corkhill, 1950). Depicted with a horse’s head (mask?) she was revered as a Great Mother equated with Cybele where she was worshipped as the daughter of Poseidon and Ceres in Arcadia, Phrygia and Lydia. Athena Hippeia is ‘Athena of the Horses’ in which form she was said to be the daughter of Poseidon and Polyphe. In Greek mythology Hippe was also known as Melanippe and Euippe which translates as ‘mare horse’. Her daughter Melanippe (Arne) by Aeolos was turned by Artemis into the constellation Equus the horse more usually identified with Pegasus.

Horse worship was practised by a number of Indo-European and Turkic populations. The water-god Poseidon was originally conceived as a horse. In one popular tradition the goddess Demeter was portrayed with her head and mane of a horse in the Phigalian Cave. A primordial relic of a non-specialised spirit of the corn was represented in the form of a horse. The Poloi, meaning ‘colts’ in Greek, the priestesses of Demeter were so-called in ancient Laconia. In Europe horses are a common form of the corn-spirit. To the Roman god called Consus horses and mules were sacred. In Gallic mythology the goddess Epona was a horse-goddess, as well as mythic remnants of the horse-god Rudiobus. Amongst the religions of Hinduism and Buddhism there is a deity with a horse’s head called Hayagriva. Again, the Indian Gond peoples worhip a horse god who is represented as a stone and named Koda Pen.

An example of a probable ancient horse cult or worship can be seen at White Horse Hill, Uffington, which has been dated to around 1400 BCE. This ‘divine horse’ is therefore too early to be associated with the later worship of the horse and fertility goddess Epona. The White Horse is of Bronze Age provenance and probably a totemic echo. It is interesting to note that the Welsh goddess Rhiannon rode upon a white horse and, moreover, the early Irish kings up to the 11th century were ritually and symbolically wedded to a white mare. The continental Celts in Europe granted sovereignty to the Great Mare Goddess as Epona whose sinister counterpart was Melanippe as the Night Mare or Black Mare, which also is the Rain God and the Devil in European folklore. For the Muslims the horse was an animal dent by god with the Hittites of Asia Minor believing the horse was sacred to their Sun-God.

The ancient Greeks borrowed the ‘horse-cults’ from the Cretans indicating the practices fertility rituals are all “…survivals of a fertility ceremony of great age, and in each case a horse’s head was supposed to confer fertility on young women.” (Corkhill, 1950). There were fertility cult survivals involving horses in Britain that included the Hooden Horse ceremony of Kent that included skulls of horses. Other “…surrogates for a horse-headed goddess of fertility…” (Corkhill, 1950) include the ‘white mares’ Lir Bhan and Lavare Baine in Ireland, similarly the Lavare Vane in the Isle of Man, and Feri Lwyd from Wales.

With regard to horse-sacrifice the animal has been for millennia a sacrificial animal (Cooper, 1992) with a number of Indo-European religious cults showing evidence of horse sacrifice. For Indo-Europeans the mystic union of the horse and their king was the justification for the horse-sacrifice (Dearborn, 1997), and thus derived from an early ritual. The evidence of horse sacrifice is derived from the discovery of the remains in graves, and during Age of the Vikings the horse was often associated with ship burials.

It was during the archaeological period of the Iron Age that sacrificed horses were frequently buried or ritually deposited. For example there is “…archaeological evidence for horse sacrifice on a large scale in Sweden in the Migration period.” (Gelling, 1969) and their crowning of the last pagan king meant the killing and butchery of a horse. The blood of the sacrifice was sprinkled on the local Sacred Tree. During the Iron Age in Britain animal remains were interred in storage pits implying “…such pits should be viewed not simply in terms of storage, but as vital elements in complex belief systems.” (Cunliffe, 1992), especially for propitiation of chthonic forces (Green, 1992). In other words the preservation of grain was a religious, as well as an economic act, and was an integral element within Celtic belief (Cunliffe, 1992).

In Rome there was the ancient October Horse festival and ceremony referred to as Equus (Frazer, 1922) and where the horse sacrifice was dedicated to Mars. The festival was marked by a two-horse chariot race with the winner sacrificed to Mars and its head taken to the local sacred hearth of the Regia. In this context one can consider the importance of the horse to the Celts during Roman times and contributed to the divine horse cults in ancient Gaul (Gelling, 1969). According to Geraldus Cambrensis an Irish kingship ritual involved the mock-coupling of the king with a mare which was then killed, dismembered and eaten by the king.

In ancient India the Vedic horse sacrifice is renowned, with its sexual connotations, as a spring and fertility ritual, and highly revered for royal sacrifices (Cooper, 1992). As with the Indo-Europeans the funerary ritual sacrifice meant the horse, or its head, was interred with the dead person. In Vedic terms it was thus at springtime that a warrior was elevated or a queen was ritually coupled with a stallion. The event involved the sacrifice of a horse. This suggests an essential role of the horse as a link between this world and the world of the dead. That horses joined their owners in the Otherworld was a widespread Indo-European belief (Moore-Colyer, 1994).

The deposits of horse remains are of very early origin and Kurgan burials from around 4000 BC reflect the ritual killing of horses for funerary purposes, similarly with Scythian horse burials origination in the 3rd millennium BC (Mallory, 1981; Piggott, 1962). Horse remains have been found in Anglo-Saxon cemeteries associated with a dead man (Gelling, 1969), as well as horse sacrifices found in association with German bogs (Moore-Colyer, 1994). In Iceland horse burials in both female and male graves often have the head of the horse only. This resembles the Iron Age and Celtic belief that the head was the repository of the soul and that animals possessed a propitiatory role in their belief system. There was a tradition widespread in Ireland of burying horse heads under household floors, and that threshold burials were for underworld propitiation, as well as a form of apotropaic magical practice (Merrifield. 1987).

Horse sacrifice and burial of the whole or just bones and teeth in human inhumations was either a “…symbolic token presence or representative of some more complex ritual.” (Philpott, 1991). Horse sacrifice and burial was also common among various Asiatic peoples, especially the Mongols. Horse cults, including those reflected in sacrifice and burial, are to connected propitiatory and fertility rituals. Such rituals are not just aimed at chthonic forces but also as components of rites of passage, and as such the horse “…performed a role of major significance in prehistoric myth, both as a link between the earthly and otherworld existence and as a suitable victim for propitiatory and apotropaic measures.” (Gelling, 1969).