The Folkore of the Night Mare

The nightmare that occurs during sleep is a dream of very unpleasant effect and experience that evokes emotional responses of horror, fear, and anxiety. In folklore a nightmare is a demonic night spirit of oppression. In other words an incubus that comes to sleepers during the night accompanied by frightening dreams. However its derivation is nothing to do with a female horse or mare. The term nightmare evokes therefore a term for a female horse but the terms are not in any way related. In popular belief it was once thought that a night mare was when the dreamers awoke and assumed they had been riding a demonic horse. In other words a nigh mare was a fiend that sat upon the chests of sleeping individuals creating the sensation of breathlessness, panic and a feeling of oppression. The prefix night adds to the aspect of the stressful dream occurring at night.

Etymologically the term is derived from the word mare in Old English which is a mythological goblin or demon that torments the sleeper into experiencing terrifying dreams. The word nightmare is cognate with the older German word Nachtmahr. Similarly the French term cauchemar which means “fiend that tramples.” The Proto-Germanic word meaning is an evil demon or spirit being that rides astride the chest of a sleeper and regarded as similar to the mythical incubus and succubus. The idea of a mare is confused in modern parlance because of the Middle English form or mare from the Old English maere, mare, or mere which are all female nouns. The etymology from folklore alludes to the Old English mare which means an incubus not a female horse. The night mare is also known as the Night-hag, and ‘riding the witch’.

In origin therefore the Old English word for an incubus was mare which is related to the German word of mahr or the nightmare. The common Germanic form was maron and the source of the Old Norse mara. These mara were believed to ride horses at night so that in the morning they were found exhausted and sweating with exertion. In Germany the night mares were thus known as mara, mahr, and mare, with charms in Westphalia aimed at warding off these demonic mares. From the Germanic maron also comes the Icelandic, Faroese, and Swedish mara, as well as the Norwegian mare and mara. The Icelanders have martroth for nightmare and which means to ‘trample’ or ‘stamp on’. Similarly the Swedes have mardron which means ‘mare-dream’. The etymological roots of mara are traceable to the word mer in proto-Indo-European which means ‘to harm’, or ‘rub away’. 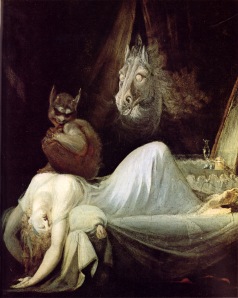 In Slavic and Teutonic mythology and belief the maras were female nightmare spirits. For the Slavs the words mora, morava,, morol and zmora could trace the core meanings back to the Greek moros or death. For the ancient Greeks they had a mythic giant called whose name Ephialtes meant ‘leaper and was a nightmare spirit. In Romania these spirits were called morot. In etymological terms therefore the Russian word mora means ghost or a revenant, whereas for the Czechs death is murawa. in Lithuania there is  maras, as well as in Estonia the Painaja or ‘presser’, a female mare-like spirit, also known as ‘cold shoe’ or Kulmking.  For the Croats mora means nightmare but was also a dark spirit form or succubus who visited men in their dreams to torture them with desire. The belief being that sleeping men had their hair deliberately entangle by these female spirits who left them with ‘mare-locks’, ‘mare-braids’ and ‘mare-tangles’.

The Mora included shape-shifting witches who assumed animal forms as frogs and toads, horses, cats and dogs, bees, birds and wasps that resembled the assumed ‘familiars’ or witch companions. The French word cauchemar has in origin the same root meaning death which signified a virile male or incubus. The ‘night woman’ in Polish is nocnica and Polish mythology contains folktales of moras who are the souls of living beings that leave the as moths, wisps of hair or straw. In Hungarian it is ejjeljaro or ‘nightwalker’ and other Slavic languages mora means moth. In Serbian folklore, similar to the Polish, a mare is called nocnik or nocnica which means a ‘night creature’ who enters the chamber and sits on the chests of sleeping men or women. The idea of the  night-mare is of ancient origin, as well as a worldwide belief in myth and folklore, and appears intertwined with notions of succubi and incubi. Proof may be sought in the Mesoptamian and Babylonian storm-god called Alu who is also a nightmare and a demon who killed people by crushing them.

An early allusion to ‘holed stones’ was during the 15th century when they were used as charms against nightmares, with stones of this type regarded as preventing bad dreams. Holed stones were often hung on bed-posts to deter demons, including the Night-Hag, the nightmare, or a succubus. It was also believed that a stone with a hole in it hung at the head of the bed would prevent a nightmare . Thus the reason why they were sometimes called hag-stones from that disorder assumed to be caused by a hag or witch sitting on the chest or stomach of a sleeping person.

7 responses to “The Folkore of the Night Mare”