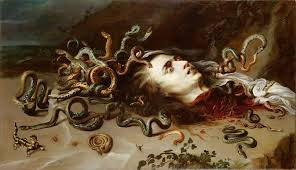 The Gorgons were monsters in Greek mythology. They were hideous female creatures with golden wings, teeth or boar tusks protruding from a flat roundish face, claws of bronze, glaring eyes, and a head of live venomous snakes or serpents in place of hair. These monstrous maidens were later depicted as beautiful but terrifying. In Greek Gorgon or Gorgo means ‘terrible’ or ‘loud-roaring’. A vicious female monster with sharp fangs who, from earlier religious concepts was a protective deity. The Gorgons wore a belt of intertwined serpents.

There were three Gorgon sisters. One was called Medusa ‘the Queen’, the second was Stheno ‘the Mighty’, and the third was Euryale ‘the Wide-springer’. Only Medusa was mortal whereas Stheno and Euryale were immortal. They were the daughters of the sea-god Phorcys and his incestuous union with Leto. They lived in the farthest west, near Night and the Hesperides, but were located later in Libya. Medusa copulated with Poseidon in Athena’s temple so the goddess transformed her golden hair into snakes.

As well as their horrific appearance they had the ability to turn to stone anyone who looked at them. The Gorgons head was called the Gorgoneion, often depicted on the shields of warriors or temple architecture as evil eye protection. Such motifs were believed to be apotropaic  as amulets capable of averting combating evil. The prototype of the Gorgonieon has been noted in Neolithic Art motifs. The iconography of the Gorgons was also borrowed from Lamashtu of Mesopotamia. An from earliest times as a vestige of the ancient powers that preceded the classical Greeks. Also Gorgons have been seen as personifications of the paralysing effect of the nightmare.

Perseus and the Gorgon.  E. Burne-Jones.

Medusa was killed by Perseus using a mirrored shield and from the wound he inflicted on her neck Pegasus and Chrsaor sprouted, her two sons by Poseidon. Returning to the court of King Polydectes it is said Perseus turned them all to stone using the head of Medusa. In addition legends say he rescued Andromeda from the rocks while she awaited a sea monster that Perseus also turned to stone.

One response to “The Gorgons, maiden monsters of Greek myth”