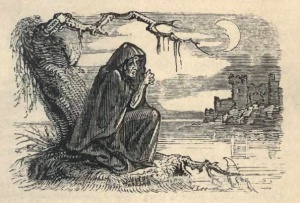 In Ireland the term bean si means variously ‘woman of the side’ or ‘woman of the fairy mounds’ as well as ‘woman of the barrows’ and woman of the fairy mansions’. Well known in Irish mythology as a female spirit, or Celtic fairy being, she is usually regarded as an omen or harbinger of death, a messenger from the Otherworld. A similar creature is the Scottish counterpart called the bean shith or bean-shidh, with a similar creature known as the bean nighe. Etymologically bean sidhe is Irish and bean shith is Scottish Gaelic. 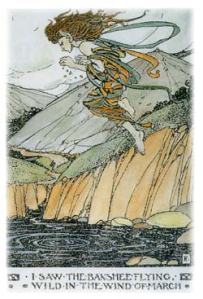 The ‘people of the mounds’ known also as the ‘people of peace’ (from siochain for ‘peace’)are called the aos si in Ireland. Fairies are referred to as the duine sith as ‘the people of peace’. The sidhe refers to the Sidhe Mounds where they dwell. The Irish banshee or ‘fairy woman’ is equivalent to the ben shee of the Manx. The bean-sidhe are believed to be echoes of an ancient Gaelic pre-Christian pantheon. However, despite being associated with ancient deities of the earth, the word banshee was not in common use before the 17th century. The ‘woman of the fairy’ in this context is a spirit of the ancestors whose role is to warn their descendants of their impending death. Another potent Irish banshee is the Eevil or Aeibhell (meaning ‘beautiful’) or Eevin or Aebhinn (Joyce, 1871). The ‘fairy woman’ also means ‘woman of peace’ derived from the Old Irish ben side.

In Scotland the banshee is portrayed as a hag, an ugly crone. However, in Ireland she is commonly depicted as a beautiful woman. She often has burning eyes of red dressed in green with a cloak of grey (McKillop, 1998). The banshee has three guises that are maiden, matronly mother, and the wizened witch-like hag, that is dressed in either white, green, red or grey. These guises are those of the aspects of the triple Celtic goddess of death and war known as Badbh, Macha, and Mar-Rioghain (Morrigan). The banshee is seen as a powerful spirit casting her spells as a ‘queen of the fairies’ in South Munster where she is called Chiadhna or Cleena (Joyce, 1871). In Leinster she is bean chaointe or ‘keen7ing woman’. 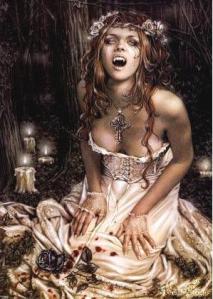 In Scottish Gaelic the Bean nighe (a specific type of bean sith, plural muathan nighe), like the banshee, is a fairy ‘washerwoman’ who is an omen of death (Campbell, 2005). The bean nighe is sometimes called the ban nigheachain or ‘little washerwoman’ or nigheag na h-ath, the ‘washer at the ford’. The Welsh banshee is known as the Gwrach-y–Rhilyn or Cyoeraeth is a spirit hag depicted as an ugly woman whose wailing is a sign of impending death. Popularly known as the ‘Hag of the Mist’ she is often invisible, but can be seen beside misty streams and crossroads (Evans-Wendt, 1990). The bean sith or bean sidhe is often referred to as the ‘Washer at the Ford’, seen near isolated streams washing the blood from the grave-clothes of those about to die (Campbell, 2005), as well as confused with the ‘White Ladies’ of folklore . Thus the washerwoman bean nighe with long fair hair.

In Scottish Gaelic the ‘fairy woman’ is called the baobhan sith and should be distinguished from the banshee, because she embodies the features of a vampire of succubus. The baobhan sith is a fearsome creature. In Scots Gaelic the solitary female wraith called the ban sith is closely related to the baobhan sith. The banshee in general is a hag who can shape-shift into a beautiful woman. Moreover, as in many an instance in Ireland, some animals are associated with witchcraft. Hence, the banshee can adopt other forms that include the hare, the stoat or weasel, and the hooded crow as an aspect of Madb. Some descriptions of the banshee ascribe to he webbed feet, a solitary nostril, protruding teeth and long pendulous breasts, who is dressed in green (Campbell, 2005).

The primary role of the banshee, with her night-time call of mourning, is to foretell death. The wailing and weeping of the banshee’s woeful cry resembles that of the Irish ‘keening’. Sometimes the bean nighe (as an aspect of the Morrigan) are believed to be the ghosts or spirits of women who died in childbirth (Briggs, 1976). Particular families have an attachment to a particular banshee whose supposed visitation may cause a very ill person to expire by the Nocebo Effect. For many of the superstitious the ‘keening’ of the ‘keeners’ is the lament of the ‘fairy woman’.

2 responses to “The Banshee”